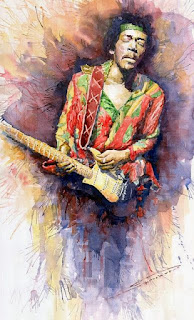 Tommy Emmanuel Lesson: How to Fingerpick Like Chet Atkins — Video 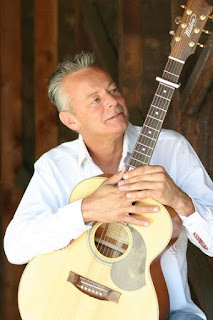 Posted 11/09/2015 by Guitar World Staff
Hello everyone, and welcome to my new Guitar World instructional column.
Over the course of the next few months, I will demonstrate a wide variety of the specific right- and left-hand techniques I use most often, as applied to the songs from my latest release, It’s Never Too Late, plus some of the other tunes in my repertoire that I am asked about most often.

I’d like to kick things off with a look at my approach to the song, “El Vaquero,” written by the great Chet Atkins and Wayne Moss, which I recorded for It’s Never Too Late. A vaquero is a cowboy, and, as the name implies, this song has a “western” feel, with a Spanish/Mexican flavor.

I first heard this song as recorded by Chet for his Hometown Guitar album, on which Wayne played the rhythm guitar part and Chet added the melody, or lead, part on top, along the lines of FIGURES 1 and 2. To execute the rhythm part properly, use the standard Merle Travis fingerpicking technique, wherein the notes on the bottom three strings are picked with the thumb, with light palm muting, in an “alternating bass” fashion, and the notes on the top three strings are picked with the index and middle fingers. 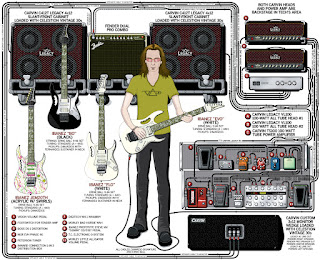 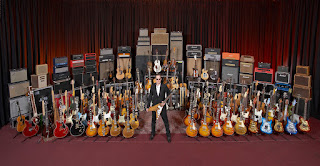 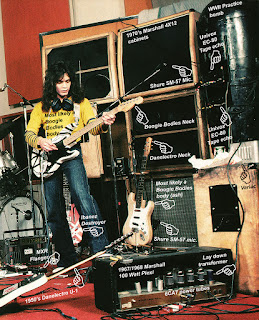 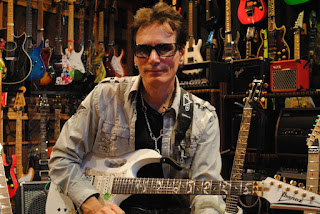 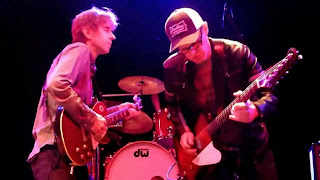 There are few names on the contemporary blues scene as big as Joe Bonamassa, a man who has taken on the record industry, and won. Still selling out massive venues the world over, Joe has never been more popular. At the same time, there aren’t many players out there who garner as much respect from their peers as Eric Johnson. Be it for tone, technique, or phrasing, he’s an absolute legend in his own right. Take a look at the video below of Bonamassa sitting in with Johnson playing “Crossroads.”


The reason I’ve put these two names together is that the flashier side of both players’ vocabulary involves incredibly fast and accurate picking of the minor pentatonic add9 scale (1–2–b3–4–5–b7). Johnson has been developing this sound for decades, but Bonamassa has absorbed EJ’s influence and combined it with bits and pieces of everyone from Muddy Waters to Danny Gatton (who served as a mentor to 12-year-old Joe). But when things get fast, Bonamassa rips out plenty of Gary Moore-style runs along with elements of Johnson’s Grammy-winning track, “Cliffs of Dover.”
When it comes to working up the technique to pull these things off, that’s very much up to you. I’ve included picking suggestions—ones that come naturally to me—though they’re more than likely not how Joe or Eric would do these. Feel free to either lean on the economy picking technique, like I do here, or use alternate picking. As long as you can play them, it’s all cool. That said, if you want to dig into the technique side of things, check out Troy Grady’s Cracking the Code, which is really the most in-depth breakdown of plectrum technique anyone has produced.
Ex. 1 is a nice little introduction to a big part of what these licks will require. The first measure is very much from EJ’s bag with the open-voiced triads (Em, D/F# and G). We then shift up to the minor pentatonic scale and play a series of descending groups of five. Both Johnson and Bonamassa prefer quintuplets rather than the traditional sextuplets (groups of six). It’s definitely worth practicing groups of five to better internalize the sound and feel of these patterns. Ideas like this can also work as 16th-notes, but the accents will fall in different places.

The next series of examples demonstrate how I’d approach each lick in a live setting, and then break down a section at a slower tempo. You’ll also find suggestions on how to pick each phrase, but feel free to experiment and discover what works best for you.
In Ex. 2, you can hear how mixing up 16th-notes and quintuplets add to the forward motion of the lick. I’m not thinking about strictly staying “in time,” but just moving as quickly as I could and making sure to end in the right place. You shouldn’t sit and practice a lick like this to a click while concentrating specifically on the different groupings—just let things flow. This is definitely the way Joe would play something like this.

The slower version is in Ex. 3. In these examples, we’ll keep things a bit simpler rhythmically and stick to straight 16th-notes. We start with a basic E minor pentatonic scale (E–G–A–B–D) before adding in the F# (the 9th of the scale) on beat 4. Take note of the groupings. Basically, we’re moving down five notes, up a fourth, and then another descending group of five. The lick ends with a descending group of six before an octave leap to punctuate the phrase.

Ex. 4 is a great example of a “happy accident.” In the third measure, we step on the gas and end up with two groups of 16th-notes and two quintuplets. All I was thinking about was where I wanted to land—I went back and transcribed it later. Don’t be afraid to push and pull with these phrases to make them fit where you want them to.

Now, let’s take a deeper look at that last bit in Ex. 5. We head right up the E minor pentatonic scale with an ascending group of five followed by another quintuplet starting on B. The descent adds in those fourths and offsets the accents. It’s this level of unpredictability that makes lines like this stand out over the more mathematical approach of players like Zakk Wylde.

Things get a bit stretchy in Ex. 6. We’re combining three-note-per-string fingerings with our trusty pentatonic shapes. Start with your 4th, 2nd, and 3rd fingers for the first three notes. Shift down to 8th position by using your 4th finger to play B on the “and” of beat 2. Finally, move down to 7th position by reaching for the B on the 1st string with your 1st finger. I also added an extra pull-off when changing positions. This wasn’t planned, I just played the lick and that’s what my hands did to allow me to execute it at this speed.

When we slow things down in Ex. 7, the rhythmic quality doesn’t change too much. At this tempo, I do pick more notes, but keep the legato going at the end. It makes the lick a little easier to play, but it also changes the fundamental sound. It can be picked if you’re going after that particular sound.

We start with some quarter-note triplets in Ex. 8, but then move into a blazing lick on beat 3. Pay attention to the picking, as it will help when moving to a new string. Isolate the position shifts at the end of the third measure to make them sound as smooth as possible.

Slowing down the tempo in Ex. 9 doesn’t do too much, but the simple fact that we’re starting on beat 1 instead of beat 3 changes the feel. How would the lick work if you offset it by an eighth-note? Or a 16th-note? They’re all worth experimenting with.

The final example in Ex. 10 almost crosses into Shawn Lane territory. Johnson was a big influence on Lane (who was even known to cover “Trademark”). We’re still sticking with groups of five, but they’re ascending rather then descending. When we get to the top we add in the blue note (Bb), but then use an open 1st string as a way of getting from one part of the neck to another.

With the more manageable version (Ex. 11), I’ve taken a few notes out. Don’t hesitate to make such small variations when learning licks like this. It’s not about casting licks in stone; it’s about exploring the roadmap of how to get from A to B.

Lastly, we have a little bass loop over a drum groove to experiment with. Try some of these ideas and some of your own. The ultimate goal is to use your ears. Listen to Eric and Joe and see if you can spot anything like this on their records. There’s enough to learn from each of these monster players to keep you busy for many years!
Publicado por Pablo Bartolomeo en 8:12 p. m. No hay comentarios: 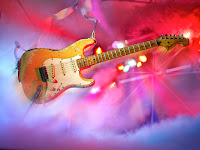 PG's Rebecca Dirks is On Location in Chicago, IL, at the House of Blues where she catches up with guitarist Yngwie Malmsteen who walks us through his touring rig that he used during the Relentless 2011 tour.
Guitars
Ygnwie uses his Yngwie Malmsteen Signature Strats with a large headstock, Seymour Duncan YJM Fury pickups, scalloped fretboard with Dunlop frets, brass nut, standard tremolo, and 250K YJM pots, as well as one more important detail: "You have to have the Ferrari sticker on the back, otherwise it won't work." He tunes one Strat down, and uses a red version for the song, "Red Devil." The guitars are strung with Fender .008 - .048 strings.

Amps
Yngwie's legendary wall of Marshalls features 36 heads and 22 cabinets. The wall is composed of vintage Marshall heads and cabinets, but his live amps and cabs are from his new Marshall YJM series. The YJM100 cabinets are loaded with Celestion 75-watt speakers. He runs one of his YJM heads at 50 watts and one at 100 watts. Though the amp has attenuation, noise gate, overdrive, and digital reverb, Malmsteen says he doesn't use those features live.

He also uses a vintage Roland Analog Echo, "to make noise," a Cry Baby wah, Taurus bass pedals (not pictured), and a DOD Yngwie Malmsteen YJM308 Preamp Overdrive.
He uses an RJM Mastermind MIDI Foot Controller to split the signal for stereo sound and to control the effects. The Fuzz Face to the left of the controller is not in use, he says, he just likes the way it looks ("like a landmine.") His picks are 1.5mm Dunlop. 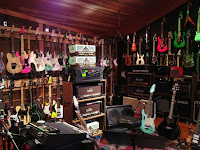 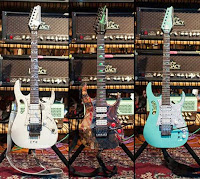