When learning how to play jazz guitar, one of the most common progressions guitarists check out is the jazz blues progression. Since it is a fundamental form in just about every genre of modern music, the blues is a natural first step for guitarists who are moving into jazz from a rock, blues or pop background.
Because of this, having a good understanding of how a jazz blues chord progression is built can go a long way in helping you take that first step into the realm of jazz guitar.
In today’s column, we’re going to be looking at the basic jazz blues chord progression, how it is built, and take a look at some common voicings you can use to comp through this important progression.
If you are looking to take this approach further, check out my article Common Jazz Blues Chord Substitutions.
First Four Bars
The first four bars of a jazz blues are relatively the same as a traditional blues, with the exception of the second bar. Here, the jazz cats like to use the “quick change” progression, which is also found in traditional blues as well but is the standard in jazz blues for the most part.
The quick change progression uses three chords in the first four bars, I7-IV7-I7-I7, which is why it is called a “quick change” progression, because you change the chords quicker than the traditional I7-I7-I7-I7 blues form in this part of the tune.
Check out the example below to see how the first four bars looks like in the key of F.
Second Four Bars
The second four bars of a jazz blues progression deviate quite a bit from the traditional blues form. Here, it starts the same, with a IV7 chord in bar five, but then in bar six it uses a #IVdim7 chord that leads into the I7 chord in bar seven.
From there, there is a VI7b9 chord, or the V7b9/ii depending on how you want to think about it, that finishes of this middle section of the form and leads into the turnaround in the last four bars.
When learning how to improvise on a jazz blues chord progression, this middle section is usually the hardest to get down since it has both a dim7 and 7b9 chord within these four bars.
If you are digging into soloing over a jazz blues progression, make sure to spend some time on these chords to really get them down in your playing so that you never find yourself handcuffed during this part of the tune when you get to a jam session or out on a gig.
Third Four Bars
The last four bars, the turnaround, of a jazz blues uses probably the most popular progression in jazz history, a ii-V-I, to bring it back around to the top of the form.
In bar nine, there is a iim7 chord that leads into the V7 chord in bar ten before resolving to the I7 chord at the start of bar eleven.
The last two bars of a jazz blues progression is a condensed version of the previous four bars. Starting in bar seven you have I7-VI7b9-iim7-V7 one bar each. Then, in the last two bars you have the same chord progression but this time each chord gets two beats, or half a bar, each.
Knowing this can not only help you memorize these changes, but it will make it easier to navigate them once you begin to explore improvising over these fast moving changes.
Jazz Blues Form
Here is an example of a jazz blues chord progression in the key of F, with the chord symbols written out on top of the staff and their function, Roman Numerals, written out below the staff as a reference.
Knowing the Roman Numerals for each chord in a jazz blues progression will not only help you understand how each chord relates to each other in this progression, but it will make transposing these chords to other keys much quicker and easier. 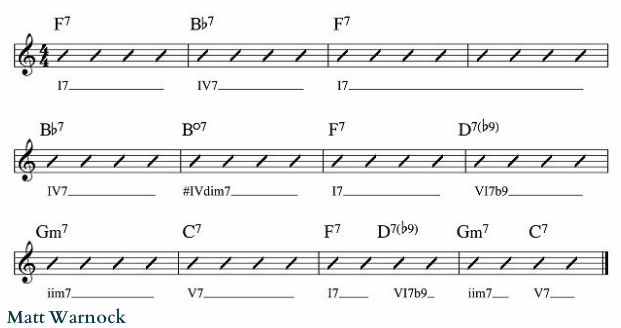 Jazz Blues Chord Example
If you are new to the jazz blues progression, and jazz in general, here is an example of a common set of chord voicings that you can use to play over a jazz blues chord progression in the key of F.
Notice that there are F9 and Bb13 chords used in place of F7 and Bb7 during those measures in the form. In jazz, as long as it doesn’t clash with the melody line, you can use 9ths and 13ths when you have 7ths written in the chart, and vice-versa.
So, if you see F7 on a chart, you can play F9 or F13 as long as those extensions don’t interfere with the melody, and vice-versa. This allows you to add color tones to your comping by bringing in 9th and 13th intervals to your chords, which often have a more “jazzy” flavor to them than plain 7th chords in this situation. 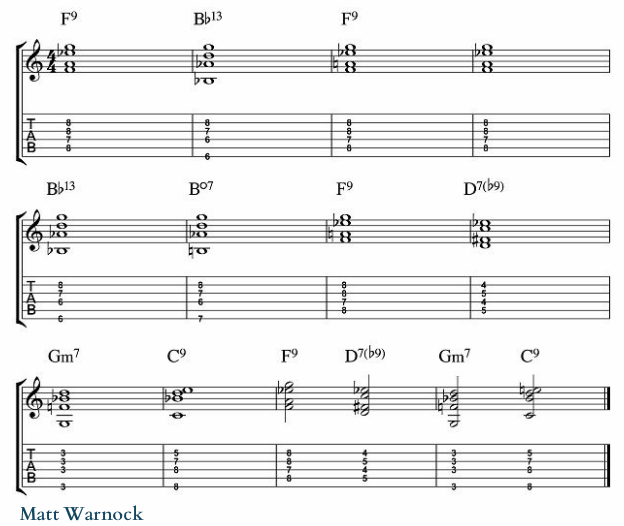 Do you have a favorite jazz blues tune or way to comp the jazz blues chord progression? If so, please share it in the comments section below.
Matt Warnock is the owner of mattwarnockguitar.com, a free website that provides hundreds of lessons and resources designed to help guitarists of all experience levels meet their practice and performance goals. Matt lives in the UK, where he is a senior lecturer at the Leeds College of Music and an examiner for the London College of Music (Registry of Guitar Tutors).
Fuente:http://www.guitarworld.com/jazz-guitar-corner-introduction-jazz-blues
Publicado por Pablo Bartolomeo en 2:54 a. m.